,I would first like to apologise because last post I did promise to post more frequent. The reason for my absence on my own blog is that I still do not have internet up and running. However next week I will. Then over to the things that have happened, first up the container  being delivered. Now this was a whole hastle because I had to arrage a crane, I had to get the container out of  Customs and arrange for both my container and the crane to arrive at the same time. But with a smile on my face I could watch my container being put in. The crane did destroy my driveway and my fence but my stuff is here now. Would love to thank Jungle James again for all his help and (unsollicited) advice.

After the container was kind of in its place, not its permanent place but good for now, it was time to get stuff out. We off course started with the beers, so after a hard day of work we could have a refreshing drink.

Later the same week I visited Jungle James and Rebecca for dinner at their place. A place that has a beautiful garden, beautiful vieuws and a lot of smells If we may believe Ginger. The little mascotte loves their place, although big fat toads eat her food when there. 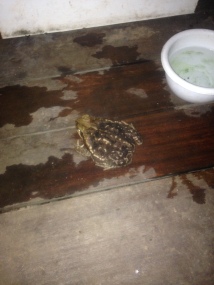 When I was renovating the second bathroom I also noticed we had a new house pet, that kept coming up trough the toilet. I’m caling him kermit.